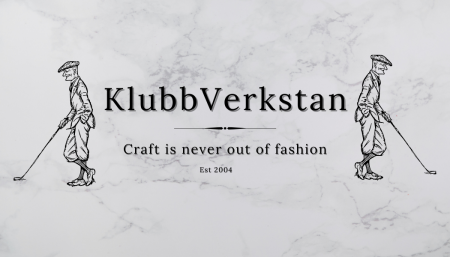 Golf the way it used to be

Over the decades my relation to golf has evolved into a mature love affair. The first phase was as a 10 year old laddie back in 1971 to play with a few second hand blades on a course we designed ourselves in the park on weekdays. And caddying in the weekends for the gentry of Stockholm for £1.50 for a round. We grew into low handicap players within a few years and competition golf bacame something new. Starting as a caddy tought us a lot about golf. And life.

Golf also got me employed with the Swedish Golf Federation to manage the development of the new national golf system. Further, golf brought me to Texas to learn clubmaking and setting up a business 2004 as a clubmaker and club fitter. The same year I came to understand the fascination of links golf via David Hamilton and became a links bagger, striving to play all the 210 true links on the British Isles. Still striding on, with half of them left. Links-bagging also helps to grow an interest in the fascination of nature. The fast running game in the wind on the links offer fantastic scenery over the ocean that fills your soul with joy and desire to play soon again.

I was introduced to hickory golf in 2010 and played the Swedish national hickory championship. This added to my interest in the history of the game, in how it all begun. A keen interest to understand the different periods, and how we ended up where we are today.

More often than not the best links courses were build from 1880 and into early 1900’s. Playing these links with the hickory clubs of the period turned out to be a smashing combo, and brouht my love affair to golf into new hights. I now became a regular hickory woodman on the British Golf Collectors Society’s hickory circuit and also became a member of Western Gails GC.

Golf and Scotland goes hand-in-hand and I think I was destined to settle in  Scotland. And as a pure Scots wannabe i ended up in 2015 with a second home, located in Troon, Ayrshire, following it up with a personal family Ritzen tartan. Gey nerdy aw’right!

As the true golf history nerd I have become, I have also taken on the task to drive the inauguration of the Swedish Golf Historical Society’s first persimmon and blades competition, the  “Classic Golf P&B Memorial” to be played in 2021 on Jönköpings GK.

The next project is still on the drawing board – the Heritage Golf Tour business in Ayrshire. And possibly a comeback into caddying. Stay tuned!

Is summary about golf, with the words of Arnold Palmer “Golf is deceptively simple and endlessly complicated; it satisfies the soul and frustrates the intellect.” And as a challenge and a passion it outlives most of us, but keeps us very engaged during the ride.

The picture is from Isle of Colonsay, close to the true links on the island. And also close to wildlife, a beach, seals. Visiting remote links such as Isle of Barra golf course, Askernish and Iona with your hickories and pitch your tent connets you to nature and is a real treat for your soul. Visit Scotland, go hickory camping!

Please feel free to contact me via email with any questions you may have.
ingvar@klubbverkstan.se